From our conserved flag collection at the Military Museum:
United States National Flag, Civil War.
According to the April 20, 1861 edition of the New York Times, the departure of the 7th Regiment, New York State Militia for Washington, D.C. on April 19, 1861, "... was one of the most exciting ever known, and cannot fail to be remembered during the lifetime of all who witnessed it." Citizens lined Broadway to support the regiment and reportedly this 33-star, silk United States flag was waved by a patriotic citizen during the ocassion. Flag dimensions are: 13 1/2" hoist x 16 3/4" fly. (2009.0055) 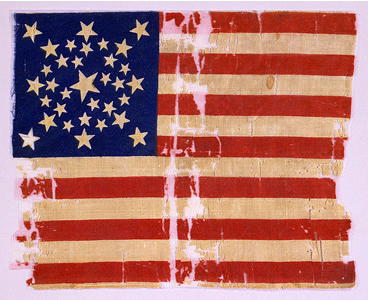 Support the Friends of the New York State Military Museum

Your membership includes a discount for purchases at the museum store, emails and newsletters on upcoming activities, and most importantly supporting the important work of the museum preserving our rich military history of New York State.  You can use our "membership" button at the top of this page to learn more about becoming a member.

Our "Donate" button at the top of this page will allow you to either make a one-time donation or become a sustaining member.  Please consider supporting the Friends of the New York State Military Museum.  Thank you.

The museum is closed on
all New York State & Federal Holidays.

Due to staffing concerns the museum
can no longer accept telephone inquiries.

The museum floor is completely accessible for people using wheelchairs.

There is no admission charge to visit the museum or any of the exhibits.